We’ve got lots of books on our shelves…and we’ve got a two year old!  That means that there are often odd collections of books strewn about.  This morning Joseph was paging through Of Woman Born by Adrienne Rich–start ’em young on the feminist theory!  He had also pulled down Lying Awake by Mark Salzman. 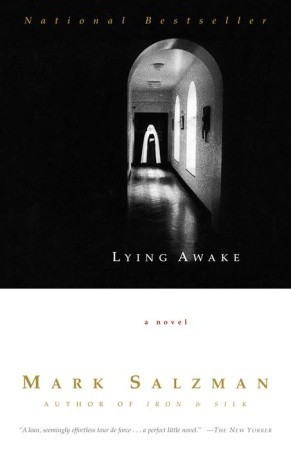 I’ve read this wonderful book many, many times; I’m a sucker for nun books!  In this slim story there is a lyric beauty, an open simplicity, and explanations of spirituality that ring true.

Mother Mary Joseph was a Living Rule, a nun who epitomized the highest ideals of contemplative life.  Tradition held that if the laws and constitution of the Order were ever lost, they could be recovered simply by watching a Living Rule pray.  She lowered the wooden clapper from its place on the wall but felt, as always, reluctant to cleave the Great Silence.  God’s mystery roared in her ears.  The cool, still air felt good against her cheeks, and she gave thanks for that.  In a few hours the sun’s heat would test her fortitude, But Mother Mary Joseph thanked God for trials too.  Gratitude must know no limits.  She struck the clapper hard.  More than just a summons to devotions, it was the voice of Christ calling to his servants.

It’s not a long book; if I’m not too tired tonight, I’ll come close to finishing.  Then I might re-visit Pilgrim on the Great Bird Continent: The Importance of Everything and Other Lessons from Darwin’s Lost Notebooks by Lyanda Lynn Haupt.  Though somewhat farther afield than her other books, Lyanda’s fine eye are everywhere present in this book.

I thought of it again as I was reading Melissa Wiley’s summer book list from 2010.  She’s got Lyanda’s Crow Planet on it, another worthy read.  And that made me think of Lyanda’s beautiful, wise, important Candlemas post.  She even talks about visiting the nuns every year.  So we’ve come full circle!  More book talk at Dawn’s place!